Twilight Of The Dogs is being released on BluRay and DVD Spring 2022! Tell your friends and sign up for our blog mailing list! Don't miss it!

John Ellis --- film director, special effects artist and the president of Arlington's Very Big Motion Picture Corporation Of America --- is looking back on the shooting of his last science fiction movie. It was, he says, hideous. Not to mention hot, humid and mosquito-plagued. Horrible. And, nevertheless, pretty wonderful.

Ellis, 38, is sitting in a blue plastic chair, about three yards from his editing desk. Which makes it about four yards from his bedroom. The meticulously clean one-bedroom apartment serves as the Very Big Motion Picture of America office, as well as editing studio and screening room-and home for him and his significant other, Lou Benzino.

Benzino, 47, who also serves as Ellis's assistant and makeup artist, sits on the floor, making beaded earrings-"to earn some spending money," she says. She speaks rarely on this day, and almost always asks for permission before making a comment.

"There's always an affair during shooting of the movie," Ellis is saying. "This time it was our director of photography and a tank driver."

"And us," Benzino reminds him quietly. 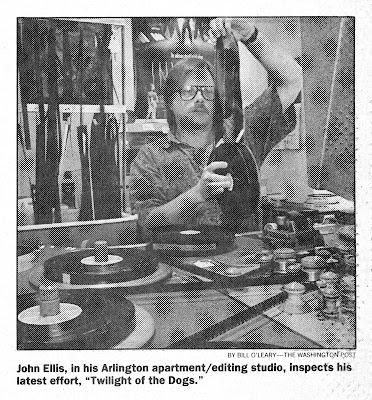 Both romances started last summer, during the shooting of Ellis's third picture, 'The Twilight of the Dogs," which should be available on home video or cable early next year. (The first two were "Beyond the Rising Moon" and "Invader," the latter of which begins airing on Cinemax tomorrow night at 9:30.) He shot it in an old tobacco house in Upper Marlboro. In fact, all of his pictures have been shot in this area.

He explains:
"I live here, for one thing. And then, here I'm unusual," says Ellis, gesturing with his hand and revealing the Mickey Mouse watch on his wrist. "In Hollywood there'd be hundreds of other guys just like me, waiting in line to get the money."

Not that it's such big money. Ellis's movies have all been shot on low budgets. "Twilight," the most expensive, is expected to come in for less than $500,000. ("But they look as if they cost millions," Ellis insists.)

He finds his investors mostly through personal contacts. They are doctors, lawyers, friends---in short, "people who have a few thousand dollars to play with." And a lot of people like to gamble, Ellis declares.

But, he says, it's not really so risky---it's possible to predict pretty well what the revenues will be overseas. "And if [a movie] takes off, the sky's the limit," say Ellis. He has high hopes for "Twilight." He will send it to the Cannes Film Festival. And, he says, maybe a major distribution company will pick it up for wider release.

Ellis, who was born in Ohio, says he got his first 8mm camera when he was 14. But he got hooked on films even earlier. "I grew up on the farm," he says. "I have this vivid memory of running in the fields that were taller than I was.

...I remember that and I remember TV...Watching 'Alfred Hitchcock Presents,' 'The Twilight Zone' and some films that just scared me half to death."

And there also were "Rin-Tin-Tin" and 'The Lone Ranger." 'They show the difference between right and wrong," says Ellis. "A lot of what I'm trying to put into the films ... comes from that period ... I'm trying to set a good example."

Ellis gets his console ready for presentation of the first, incomplete version of "Twilight of the Dogs." He switches it on. Nothing happens--- the bulb has broken. Ellis the handyman dives under the console.

Finally the film starts to roll. There's still much to be done; special effects will be shot and added, the music hasn't been composed yet, and the sound seems rather artificial, but one can get some sense of what seems to be a rather eclectic story. 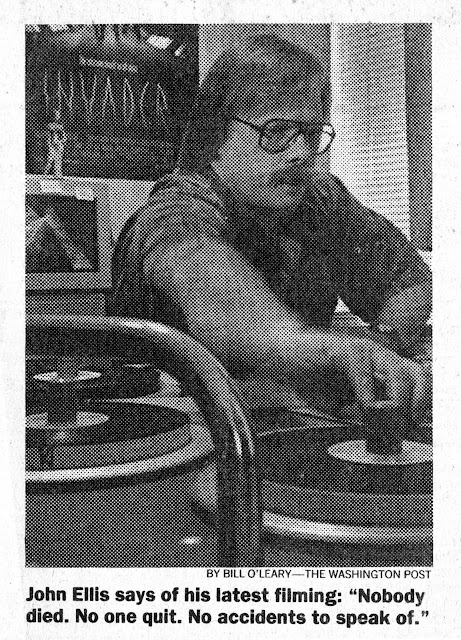 He says he makes science fiction movies because he has the right background for them. And he can create a lot of the special effects himself. "It's very easy to write in the script that you have a spaceship, and it lands, and people get out of it ... [But] how to do it,  how to make it exciting and interesting ... I can bring that to films."

And the science fiction market is strong now. "A year ago," he says, "if I'd called and said, 'I have a science fiction movie,' a lot of distribution companies would have said, 'Don't call us, we'll call you.' "He suspects it's partly due to a relaxation of the world political climate. "Since the fall of the Berlin Wall, and other things, people are maybe looking more towards the future."

Shooting "Twilight'' took 35 days last summer. "We had a heat wave," recalls Ellis with a shudder. 'The building wasn't air-conditioned." It was so bad, he says, the actors were fainting. And there was a plague of flies and mosquitoes. "We were covered with bites," he says. But then he turns to the bright side: "Nobody died. No one quit. No accidents to speak of ... Nobody really got hurt on the film. Well, a cow stepped on [lead actor) Tim Sullivan's foot. That's no fun."

And what was fun? "I climbed to the top of a hill, to pick an angle to shoot from. And I ... saw all those people: the main actors, and all those extras and support people, a Russian tank and a trailer for the animals, all that stuff just stretching out-almost as far as I could see. I said, 'Oh my God ... I caused this to happen! That was quite a moment for me. But it was scary."

Ellis hopes this movie will put him over the top. His previous one, "Invader," was a financial success---video sales worldwide totaled $6 million- and that has made a difference. 'I have more and more people come to me, saying, 'We will get the money, we want you to make the film.' Until just a few months ago this would never have happened."

If he ever makes it big, he says, he probably would move to California. His children live, there now with his ex-wife. But "even if I do go out there, it's more than likely I would still continue to make films here," he says. "It's better to be a big fish in small pond."

But even if 'Twilight' isn't a hit, he says, "as long as I can work with nice people, have a relatively good time and have projects I relieve in---I'd be happy doing this. I try hard to make sure I don't take myself too seriously. It's· a business.

And it consumes most of his time: editing, calling, dealing with film crews and various specialists. Meanwhile, Benzino works on her earrings and answers the phone.

He works 12 hours a day, he says. At least, she interjects.

Isn't it difficult, spending so much time in this tiny apartment with dozens of strips of film hanging on the wall, with the console and the press cuttings and the posters? Doesn't it ever get claustrophobic?

For a while it seems they don't have an answer. They exchange glances, and then Ellis begins to speak about being a workaholic and not being able to imagine doing anything else, and points out that they don't stay indoors all the time---they can't shoot a picture there.

Then Benzino says she doesn't really need to go out, she feels okay at home. Finally she casts him another glance.

"The things that are making us happy," 'she says, "are right here."

Originally published Saturday December 11, 1993 in STYLE (The Arts/Television/Leisure section of The Washington Post). Photographer Bill O'Leary was a friend, one of the members of the Washington film-making group The Langley Punks,  and it was a surprise to see him and chance to catch up. Actually, one of the Punks, Pat Carroll, appears in my film Invader!
To be honest, I really didn't like the article, my least-liked of all the press coverage over the years, but am presenting it for posterity. And though I wasn't fond of the article, many people at the time liked it and called me to congratulate me for its being in the Washington Post. So what do I know? Also note that Lou Benzino and I were close more than a decade before Twilight, and are still nearly 30 years later.
I'm moving posts about Twilight to every other Friday morning, to give more time to deal with the movie restoration itself, and also, Linda dislocated her hip replacement a second time in a week, and this time it was brutal, and have even more to deal with for the moment. Hopefully Friday January 28th's post will finally see the Visual Effects update I've been promising for the last few weeks, some really cool stuff! See you then!
John Ellis
Hollywood, California
#twilightdogs #longlostfilm

Subscription form is now at bottom of each page!

NOTE that FACEBOOK has BLOCKED re-posting of anything linking from this blog address. Until they fix it it can't be done. Sorry for the inconvenience.

Twilight Of The Dogs: The Movie
Hello! I'm John Ellis, the Producer & Director of the movie TWILIGHT OF THE DOGS. In the picture with me is Alicia Craft, Director Of Photography of the film. I've been working in the film industry for almost 50 years.